"Sophisticated high-tech take on electrifying one of the world’s favourite folding bikes."

Impressive and thoughtfully applied high tech approach
Zippy and lightweight motor
5 year warranty on pod system
Pricey for a system-only purchase
Buy if: You want the most advanced electrically assisted Brompton out there – and you can afford it.
___

Back in 2016 I visited the ARCC Innovations design and manufacturing site in Cambridge and was impressed with the array of CNC machines, 3D printers and skilled bike building facilities that had been put together to produce a new electric assist kit, the ARCC Intelligent Drive Pod.

At the time they had not launched their Brompton specific system so I was excited to loan their latest iteration of the kit for the UK manufactured small-wheeled folder that seems to go from strength to strength – not least as the Intelligent Drive Pod is one of the very few e-bike conversion systems to feature Bluetooth wireless power level control. 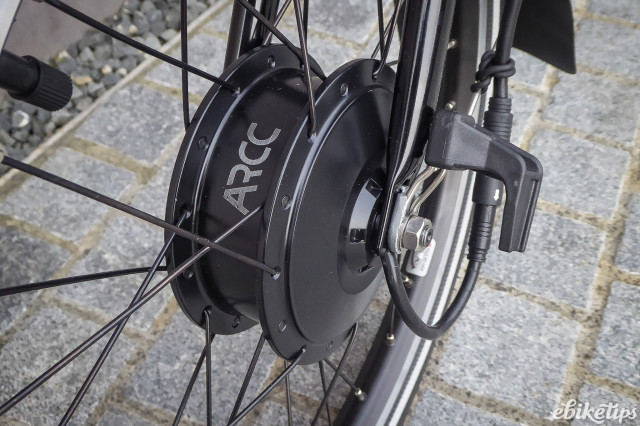 The ARCC pod system is made up of a very small and neat looking 250W geared front hub motor and a solid looking aluminium ‘pod’ (wiring nexus and battery mount) clamped securely on to the head tube which communicates wirelessly with the handlebar-mounted Bluetooth controller (or an iPhone with appropriate app if preferred). Also feeding into the pod are the cables from a bottom bracket torque sensor and brake lever sensors.

Battery power is supplied by a choice of 144 or 216Wh Bosch power tool batteries and there is the option of buying an even larger 324Wh Bosch power tool battery though that is not directly available from ARCC, despite this it’s easily available through DIY outlets and the like. All three capacity batteries can either be slid onto the pod or used inside an adapted Brompton bag.

Using power tool batteries has the advantages that they are relatively widely available, reasonably priced and likely to be around for a good long time to come. Another plus is that they should be pretty robust if designed for power tool use, indeed they are rated to withstand a 3m drop. The obvious downside is that they are small capacity compared to the modern standard of 500Wh batteries (or bigger) that comes with many current mid-drives.

This might all sound fairly conventional for a retrofit system, but it’s not. The high-tech approach doesn’t stop at Bluetooth control of power levels. The eponymous pod contains control electronics that integrate a 3-axis accelerometer to estimate how steep any gradient you are riding is, automatically adjusting power accordingly if you are in automatic mode. There is also a manual mode and you can switch between modes using the sleek looking wireless handlebar control unit that is smaller than a matchbox. The unit also lets you dial up and down the six power levels, and it removes from its secure magnetic cradle-style holder so you can easily slip it into a pocket as a way of making the bike less attractive to thieves.

The ‘launch control’ feature is activated by applying both brakes and pressure to the left pedal – ARCC say the pod senses this and delivers maximum power to the motor for a period of three seconds, so that ‘an effortless get-away can be achieved for safety, when moving away from traffic lights and crossings in heavy traffic.’ The pod also houses a bank of three USBC ports on the side for phone or GPS charging. All in all, the pod is one of the cleverest box of tricks on any e-bike I’ve come across.

What stands out before you have even ridden the bike is the precision engineering. The pod, battery latch, pod side lever, Bluetooth handlebar-mounted controller and cradle components are all CNC-machined from solid billets of 5083 grade Alplan aluminium alloy then polished, hard anodised and weather-sealed. The Bluetooth controller is held in its handlebar mounted cradle magnetically, the cradle being designed with a lip that makes it almost impossible to knock it out accidentally.

There’s further reassurance of the system’s quality in the form of a five year guarantee, and this is complemented by the fact ARCC will honour the Brompton warranty if they supply a new model with the ARCC system (or they will retrofit it to your own Brompton and honour any remaining warranty on that too). Bosch batteries come with a two year guarantee from Bosch themselves.

If you like the sound of system but not on a Brompton, then note ARCC also offer it on Abington, Airnimal Joey, Moulton TSR and Rosemont bikes. ARCC also say they offer bespoke fittings, with previous bike conversions including a recumbent and the PF Mobility Side-By-Side Trike. Unlike most other retrofit systems there is no self-fit option, and the ARCC system must be fitted in-house at their Cambridge HQ.

How it feels to ride:

The motor pulls along nicely some fractions of a second after you start pedalling, and cuts off almost instantaneously when you stop pedalling. It feels nice and responsive and the effect of torque sensing is clearly in a different league to cadence/crank motion-sensing e-bikes; however, it’s not quite as immediately responsive to pedal pressure as a Bosch or Shimano mid-motor, nor does it have their raw power. The ARCC system seems designed to respond to a reasonably light pedal pressure and early selection of low-ish gears for the most effective hill climbing.  However, once you get the feel for the system it zips up hills in a very impressive manner for such a bijou motor. It’s a little more noisy than average and so will draw a bit more attention to the fact it’s an electric bike, which you may or may not be bothered about.

The Bluetooth control on the handlebars worked faultlessly, never cutting out or turning itself off or any of the other things wireless gizmos can sometimes do. My only real criticisms were the fairly small and fiddly buttons (making it somewhat tricky to operate with gloves on or in the dark), and the fact battery capacity is shown by changing colour of a capacity indicator light, which means it’s hard to get a very accurate indication of the state of charge.  Despite that it’s ideal technology for a folding bike like the Brompton, removing the need for a trailing wire that could get damaged or tangled in the folding process, and it sheds a little weight to boot. There is an alternative to using the handlebar-mounted Bluetooth controller in the form of a smartphone app, but as this is only available for iPhones I was unable to test it on my Android smartphone. Automatic mode certainly gave a boost up the hills compared to the equivalent manual power setting, but it didn’t ‘throttle back’ the power on the flat as much as I expected it to. ARCC say that in manual mode typical assistance ranges from 88% of rider effort at minimum user setting to 176% at the maximum setting, though it can be higher or lower depending on the terrain.  As confirmed by the feedback from my test ride, ARCC add that in automatic mode assistance will never be less than in manual mode, but it can be greater than manual if the bike is climbing a gradient. The equivalent assistance range of 88% - 176% is still applied, but it is applied irrespective of the power the user is putting in. At less than 3% slope, performance will be the same as manual mode but on steeper slopes the assistance kicks in progressively to reach a maximum level on a 13% (7.5°) slope.

In effect the automatic mode gives greater hill climbing ability for less human input. I thought of manual mode being ‘workout’ mode as it got me moderately out of breath over hilly country whilst automatic mode was treated as ‘get to work without sweating mode’.
The automatic setting also solves the problem of having to fiddle around with a small handlebar control. I found this a real boon on my hill rides from my home in the Pennines; I just set the power at level three and left it there with the inclinometer sensing the hill gradient, and picking up the amount of assist when necessary. The only downside is that it didn’t cut back on power on the flat as much as I was expecting at the expense of battery economy. I found I didn’t use the ‘launch control’ feature much as it was easy enough to pedal straight off, even on hill starts, but I can imagine it being useful in very busy city conditions where getting ahead of motor traffic is a great safety feature.

Weight-wise it’s pretty competitive compared to other electric Bromptons. Complete with battery my converted M6L Brompton weighed 15.77kg. A non-electric M6L weighs around 11.7kg so the complete adds around 4kg. The 6Ah battery I was using weighs a bit over a kilogram, so removing it for folding would leave you with a 14.7kg folded bike.
There is a choice of chargers – a bulkier slower charger which would be fine for home charging (and probably a little kinder to the battery) and a more compact, faster alternative that would be more suitable for those who need to regularly take it with them on the bike.

Overall, this is the smoothest performing and highest quality electric Brompton motor system I have tried, and goes a considerable way towards solving many of the difficult engineering challenges that electrifying such a relatively complex folding design brings.